Pygmy does are usually excellent mothers, and often the mother of quad­ruplets will try, and succeed, in raising all four babies herself. Occasions do arise, however, when the newborn kids must be bottle-fed entirely, or at least supplemented.

If you have any idea that a kid will need supplementing, or bottle-feeding, begin its bottle training as soon as possible. Once kids have learned to nurse, they greatly resent having a rubber nipple passed off as the real thing. But if they learn early that rubber nipples come filled with delicious milk, they will

readily learn to alternate between mother and her substitute. Switching a kid from mother to a bottle after the first day or two of life can be difficult and stressful, and can be so easily avoided.

The best formula to feed baby goats is goats milk. Fresh milked from moth­er or your other pygmy does is the ideal, since pygmy milk is higher in butter­fat than other dairy goats. You might find someone in your area who is milking their dairy goats and is willing to sell their excess fresh milk. (Fresh goats milk will keep for about one week in the refrigerator, but it can also be fresh frozen and will keep for months in the freezer.) Some supermarkets and health food stores will carry pasteurized goats milk, and many will also carry evapor­ated goats milk. The evaporated milk must be diluted half with water before feeding to a kid. If you strike out completely on goats milk, then get a lamb’s milk replacer – not cow’s milk or cow’s milk replacer.

Newborn pygmy kids will drink very well from a well-worn black lamb’s nipple on a small coke bottle. Some people prefer to use a regular baby bottle with a preemie nipple, but I have found that saving the old, almost worn out, nipples from previous bottle babies allows the lamb’s nipple to be as soft as the preem­ie nipples, and the kids don’t have the problem of butting up against the plastic rings of the baby bottle. Heat the milk to approximately 102 degrees. The milk should be warmer than you would feed to a human baby, but not hot enough to burn your wrist when testing it.

Most kids need only be fed during daytime hours. Nighttime feedings are only necessary for kids in less than perfect health. Approximate feeding times and amounts are indicated in the following chart:

The biggest mistake in bottle feeding goats is overfeeding. Once a kid has learned to drink from a bottle, he will drink until he bursts. The above amounts are more than enough for a healthy kid. By decreasing the amounts and frequency as indicated, the kid will learn more readily to eat the hays and grains that will be his life’s food. You should be offering your kid hay and clean water within the first week of life. (Watch your other kids out with their mother. They be­gin tasting the hay and grain with her at just a couple of days of age.) Start with small amounts changed daily. As the kids start eating more, increase the amount fed so there is always a little bit left when the next feeding is due. 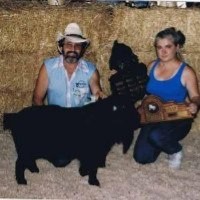